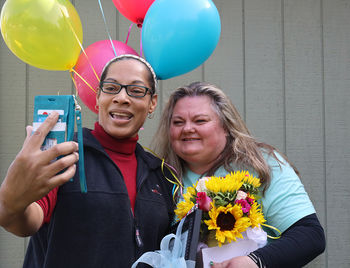 WEA ESP ACT Chair Rochelle Greenwell surprises Keri Roberts at her home to congratulate her as the 2021 WEA Education Support Professional of the Year.

Keri Roberts can’t help but notice that when she is having a bad day and making mistakes, other adults stop to ask if she’s OK, or what’s going on, or if they can offer any help. But too often when students make mistakes, the default for school systems is to react with reprimands, punishment, suspension.

"When a student makes a mistake, often times it looks like they know they’re intentionally doing it. But they're still kids. They're still trying to put it all together. Maybe they don’t have the words to describe the frustration they’re having," Roberts says. "We just expect them to live in these boxes, but haven’t given them the skills, the words, the tools that they need to exist."

The compassion that Keri brings to her job as In-School Suspension Monitor at Central Kitsap High School in Silverdale, plus her dedication as a culturally responsive trainer and her work as a union activist, have made her WEA’s 2021 Education Support Professional of the Year. 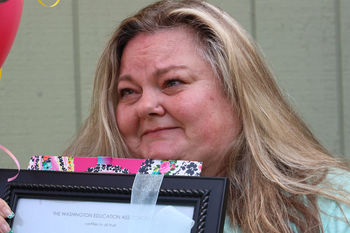 "The best part of my job is getting to work with students who feel like the world has given up on them, or that made a mistake and are beating themselves over the head because they did something stupid," Roberts says. "And it’s like, 'Dude, you made a mistake. Alright? We’re going to move forward through this. It doesn't make you a bad person.' How can I give them that grace to be more than that moment?"

Compassion doesn’t mean she ignores the need for accountability or corrective action. But as a trainer of Culturally Responsive Classroom Management (CRCM), she understands that effective discipline is far different than old-school "punishment."

"Discipline is teaching through a behavior, teaching a student or an individual a skill so that they can next time navigate those waters differently, with a more successful outcome for themselves and for those around them," she says. And a behavior is not isolated: it almost always involves factors beyond the particular eruption that sparks the discipline.

"As educators, we need to reflect on the situation, and see what part our roles played in the discipline. So students don't like pop quizzes, right? So did we forget to give that warning? Maybe that's what set the student off. It's not like we're taking blame and putting it on the educator, that’s not it at all. What we're saying is it's not just simply a student misbehaving. That behavior is communicating some type of message, and as the educator in the room, it's my job to figure out what that message is — and to help that student find a more effective way to get that message across."

Keri was nominated for ESP of the Year by Shawna Moore, a middle school teacher in Highline and fellow CRCM trainer.

Keri's hard work, open heart and sweet demeanor means she has become "the go-to for ESPs across the state," Moore says. "She is committed to empowering all ESPs and supporting them in their journey."

"Her values of equity, tolerance and kindness bring people to her," agrees Cristi McCorkle, WEA's ESP Coordinator and a former UniServ Director at Keri's WEA Olympic Council. There are countless examples, "from students that will say that she has literally kept them from dropping out of school, to stating that she is the mom they never had. … She is equally understanding, welcoming, and loving to all."

"Keri is a tremendous leader and advocate within our council," he says. "She consistently analyzes decisions that we are contemplating through an equity lens, and she is especially mindful of the impact our decisions have to our colleagues and students of color."

Keri says a concern for social justice has always been part of her fiber, perhaps from the years she lived in the South as a young teenager and the "rules" she witnessed on whom you could and couldn't associate with.

"It just didn't make sense to me because I'm like, 'Well if we like each other, why can't we hang out? Why can't we be friends?'" she recalls.

She also found herself to be passionate about the environment before it became mainstream, and that led to her degree in Environmental Science from Western Washington University. Likewise, she traces her passion for union activism to her formative years, growing up with family who were active Teamsters, fire fighters and shipyard workers, all union.

"Unions are still very relevant," she says. "We still need them. Corporate America would love to just reduce us to a dollar bill. If we don't stand and fight for something more, we're going to be back to the pre-labor movement. It's important to have that voice. If you want better, you have to fight for it."

Keri is a building rep, a CKESP Executive Board member, WEA Olympic Council Rep., facilitator of WEA Olympic's Equity Team, and a cadre leader for the equity strand of paraeducators certification. She currently is working on her master's to become an adjunct college instructor to help guide the next generation of teachers. But she is quick to note she doesn't do it alone.

"I work with some amazing people. Honestly there is no way I could do half of what I do if I didn't have amazing people around me," she says. "They inspire me to keep doing more, and being better."

Posted in: Blog Entries | ESP | Awards
Back to Blog

A work of art for healing