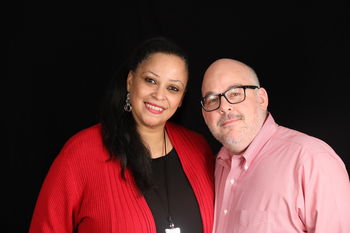 Congratulations to Larry Delaney and Janie White. They were elected to be WEA's next president and vice president at the WEA Representative Assembly in Spokane in April. They take office just after the gavel goes down at the NEA RA in July.

Delaney is the council president for WEA Fourth Corner, as well as the Lakewood local president. He is a math teacher at Lakewood High School, where he works with seniors who have struggled to pass the SBA, helping them navigate to graduation. It is this work that has motivated his interest in legislative activities, and specifically working to delink graduation from standardized test score results.

Delaney's wife, Julie, is a Kindergarten teacher, providing him an up-close view of the other end of the K-12 bookend. This perspective has tightened his focus on the need for more safety staffing to support students and educators, something he hopes to focus on in the years ahead.

Janie White is the president of the Renton Education Support Professionals, the WEA ACT (Action Coordinating Team), and a WEA Board member. She was the WEA ESP of the Year in 2017, and serves as the office manager at Nelsen Middle School in Renton.

White is the second person of color* and first ESP to hold one of the two WEA elected positions. "I'm excited for this new role, and for the opportunity to help WEA become more inclusive and transparent. I'm committed to communication and equity. Like I said throughout my campaign, 'Together, we'll put the 'we' back into WEA.'"

As an office manager, White is ever-busy, working to support her students and her colleagues. In fact, when she returned to Renton right after the Representative Assembly, she was back at the bargaining table, pressing for a living wage for her members.

Delaney and White were both elected as local presidents the same year, and first met at a new presidents training. "It's great, all these years later, to see where we've come. I look forward to collaborating with Janie on behalf of all our members," said Delaney.

*Earlier we reported that Janie White was the first person of color elected to one of these leadership positions. We were corrected by longtime WEA RA Parliamentarian Tom Carter, who has worked in his role for 50 years! He informed us that WEA elected a black president, a man named Ester Wilfong, in 1968.

Posted in: WE Are WEA | Member spotlight | Elections | Racial Equity | ESP | School Safety
Back to Blog

We're in this together...for the long haul

We’re counting on you – census forms must be filled out

A message for ESPs from WEA Vice President Janie White