It should come as no surprise that someone who dedicates their career to social work cares deeply about inequality and social justice. And while the COVID-19 pandemic has spread countless horrors, it has simultaneously helped awaken our communities to glaring inequities that have been ignored far too long.

That has helped Carrie Littlefield Syvertsen, a Seattle EA member and this year’s National School Social Worker of the Year, rethink how she approaches her mission.

“The data is really glaring and appalling at how we are failing our BIPOC students, and that schools, I think, are racist structures,” Syvertsen says. “It used to be that I would help families navigate and try to overcome barriers. And now I am really passionate about talking really explicitly about the barriers, and then trying to dismantle them.”

Historically, school social workers have helped connect students and families to community resources that allow students to thrive. But now, Syvertsen says, instead of centering her strategies around issues facing a particular family, she is looking much more at the societal barriers that may be contributing to that family’s struggles.

“It’s so much more complex and deep: the institutional racism feels like such a huge beast to even be able to tackle,” she says. “But I feel real passionately that you dismantle systems in sustainable ways, in a lot of little steps that take time. It’s like a marathon, not a sprint.”

She believes the dual pandemics of COVID and institutional racism provide an opportunity to reimagine education, and school social workers are there to innovate and influence positive change.

So how does one affect huge educational and societal systems?

Syvertsen’s strategy is to find allies, and to create visibility.

Unlike her experience in the Midwest, many districts in Washington still don’t employ school social workers as certificated ESAs. And when they do, they often are hidden behind other titles: family support worker, counselor, intervention specialist, or graduation success coordinator. Even our state’s largest district, Seattle, didn’t have dedicated school social workers until former WEA staffer Steve Pulkkinen, then executive director of the Seattle Education Association, worked with the district to hire the first three in 2007. Syvertsen was among the three hired that fall. But she, too, worked under differing titles. Her profession can feel invisible.

A year ago, in November 2019, Syvertsen combed through the district’s HR records to see who else on staff had an MSW, or master’s in social work. To her surprise, she found 44 MSWs in the district, most all hidden behind other titles. Following on those efforts, the district this summer agreed to identify its school social workers by their proper title, and link them together in a common department.

“I think my avenue, honestly, is promoting our profession,” she says of creating change. And she understands the strength in numbers. Together, school social workers can speak with a united voice about the issues they see — and help focus on the root causes. They can work together on cohesive policies at the district and state level. And they can unite to support legislative changes that bring those policy initiatives to life.

“We are able to tackle big problems together, and to support one another,” she says. “That is my passion: I feel like our profession as a whole — and our strength in numbers, and us being in schools — will help combat and dismantle those barriers.” 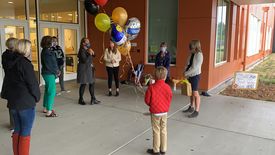 Syvertsen’s recognition as National School Social Worker of the Year comes from the School Social Work Association of America. She works in Seattle’s Robert Eagle Staff Middle School, and previously worked nine years at Chief Sealth International High School. She also served as vice president of the Washington Association of School Social Workers, where she worked for five years. One key victory, with WASSW’s then-President Erin Romanuk, was passage of HB 1377, Improving Students’ Mental Health by Enhancing Nonacademic Professional Services. Until the legislation became law in June 2018, there was no definition for a school social worker in Washington.

Syvertsen worked in middle schools in the Chicago area, the Kent School District in Washington, as well as Seattle’s district office in its Behavioral Health department to implement Positive Behavior Interventions and Supports (PBIS). As a school social worker, Syvertsen works with a multi-disciplinary school team and advocates on behalf of students’ mental health within the school system. Using trauma-informed anti-racist practices, she conducts staff training on de-escalation techniques, provides crisis intervention and mental health counseling, collaboration with other professionals and community agencies, social emotional learning, and advocacy for students and parents.

While school social workers are part of the education fabric in other regions of the country, they remain rare in Washington, with district’s largely relying on unsustainable grants or local levies for funding. Even in the state’s prototypical school model, funding is allocated for only one school social worker for every 72,000 — yes, seventy-two thousand — students at the middle school level.

“I’m proud to call myself a school social worker,” Syvertsen says. “We get messy in the work. We uncover and unravel the many layers that influence human behavior and dynamics. And we actively and unapologetically advocate for changes in systems — and changes in hearts and minds.”

Posted in: WE Are WEA | Member spotlight | Awards
Back to Blog