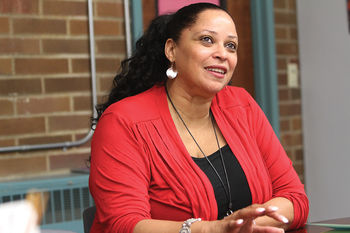 As a former office manager, Janie White has experience in supporting healthy morale.

Anyone who has spent time on bedrest understands all those hours on one’s own leads to deep thinking. For WEA’s new Vice President Janie White, two separate times on bedrest saved a life and dramatically changed a life.

“The last time I was on bed rest, I donated a kidney,” White says. She was down for several months when younger daughter, Mykala, tried to enter the world a little too early. An aunt who helped raise her desperately needed a kidney. White had herself tested and was a perfect match so three months after the baby was born, one of her kidneys went to her aunt. The aunt had another good 15 years until she passed, but the doctor told White the kidney was still going strong.

Last year, White found herself on bedrest once more. “I broke my leg when I fell down two stairs. In that process, I wondered if there has ever been a person of color or an ESP in WEA governance. I didn’t see anyone represented and I decided to run for VP and make history.”

White is WEA’s second person of color and first ESP to hold one of two WEA-elected positions. It’s a distinction she holds close to heart.

“I tell people the only way you can make a difference is you,” she says. “I have spent my whole time in the union telling people to get involved, so shame on me without doing it myself.”

Several years earlier, White was asked to attend a WEA Representative Assembly at the last minute. She was an office manager at Black River Alternative High School when a colleague asked her what she was doing for the weekend. When she said she didn’t have big plans, her friend asked her to attend RA “where they would house and feed me — all I had to do was pack my bags.” White was slightly hesitant, knowing she had been asked to attend because she was a person of color. That RA turned out to be “amazing,” she recalls.

“It was filled with energy and power in a room full of passionate union members, networking with strangers and realizing we are the union and we can make a difference,” she says. “One of the topics was LGBTQ.”

From that RA experience, “I went all in with the union as a person and member.”

“I turned tokenism into empowerment,” she says, “and this has always driven me to do more.”

Every member has a voice, but no one will know what you have to say if you don't speak up, White tells ESP members at the 2018 ESP Conference in Federal Way.

White became a building rep, began asking co-workers and friends to get more involved, and was elected vice president of Renton Educational Support Professionals (RESP). She worked hard to change the one-year contract which used to treat all ESPs as temporary workers so if they were laid off, they had to start over. Now, every ESP member has a regular contract after working in the district for two years.

When her youngest daughter graduated, White ran for RESP president. She brought her inclusive style to the position, one she held for six years.

“I gave everyone a piece of the pie,” she says. “I didn’t believe that the president should do all the meetings because, then, how can others learn about all that is going on?” 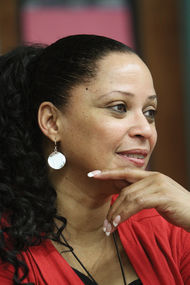 As the first ESP vice president and and first person of color elected since 1968, Janie White says she will emphasize the voice of those who feel their voices are sometimes lost.

She joined WEA’s ESP Action Coordinating Team (ACT), a statewide group that advocates for and advises local ESP units and coordinates conferences geared specifically for ESP members, and Organizing for Power. She became the first person of color to lead ACT. She is a graduate of the NEA ESP Leaders for Tomorrow and is active with Rainier Educators of Color.

White entered the field the way so many ESP members come to the work — she was a PTA president and constant volunteer until people at her daughters’ school asked her to apply to be a substitute in the office. She credits many who have helped her on her union journey, including WEA staff members, Naché Duncan and the late Rosemary Wolf, for showing her the power and voice she has as an ESP and for empowering and encouraging her leadership qualities.

White will continue her involvement with ACT and put ESP issues at the forefront, but she also says she is really looking forward to gaining a fuller and stronger understanding about issues impacting certificated members.

She says she loves people and getting to know strangers. She loves to hug and exudes a warmth and comfort for one and all when she enters a room. She will miss her students whom she calls her “babies” as well as her colleagues at Nelsen Middle School where she has worked for the last nine years. As proud mom to Mykala and older daughter Myriah, White is happy to share photos of 4-year-old grandson, Noah, and Myriah’s husband Semel.

Last spring, White’s daughter was the victim of gun violence. Between dealing with the horror of that tragic incident (her daughter has recovered from her injuries) and nursing her broken leg, White had to step back from her union work. Then WEA President Kim Mead called to see how she was doing and, White recalls Mead saying, “I need to make sure you don’t disappear.”

White has no intention of disappearing. She says she believes that the bedrest was God’s plan so He could help with her planning her next move. She wants members to own that “We are the we in WEA. You are the union. We are the union.”

Posted in: Member spotlight
Back to Blog