Seattle substitutes have their own professional development day 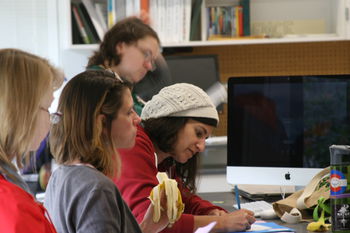 The Seattle Education Association Substitute Association reports that they were “giddy with excitement” at presenting their third annual Substitute Professional Development day on the last day of August.

The all-day event is unique in that it is for substitutes and created by substitutes.

“As far as we know, “SEA Substitute Association President Peter Henry says, “we are the only Substitutes Association in the country doing something so ambitious.”

More than 200 substitute teachers, paraeducators and other education support professionals gathered at Nathan Hale High school. Henry says that’s a 50 percent increase on last year’s participants and that they had to have a waiting list because their simply wasn’t enough room for everyone who wanted to attend.

Those who attended were paid by Seattle Public Schools from a fund SEA negotiated several years ago to pay for substitute professional development.

“It’s been interesting to learn about AESOP,” Amy Stolov says. She said she was excited to learn about the District’s new automated substitute management system which allows substitutes to customize what times they are available and whether they have school preferences.

Edmonds Substitute Teacher Association President AJ Lambert attended the professional development day as a guest. “We’re the two locals that actively represent the subs and we offer some different training in Edmonds so I came here for idea gathering and community building,” Lambert says.

Charnjit Sandhu Dhoot, a substitute who is new to Seattle says she attended so she could to get to know people. Henry says the day could not have happened without help from Karin Engstrom, Christina DeCarufel and Jan Bowersox.

Posted in: Educator tips | Training
Back to Blog

Register today for the WEA Bargaining and Beyond Conference