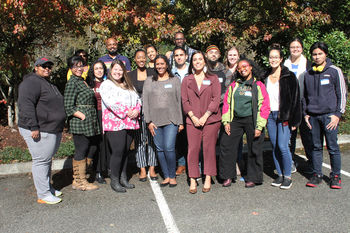 More than 20,000 WEA members are in their first five years as educators.

Thea Beaudoin is one of them. This is Beaudoin’s third year as an educator. She’s a one-on-one paraeducator in the Clarkston School District on the border with Idaho.

Beaudoin recently joined other members of WEA’s Early Career Educators Committee to discuss how WEA can build stronger connections with the newest members of the education profession.

“It’s important for me to be part of the union so I can make public education a great place for students and educators,” Beaudoin said. “It’s such an honor to be here to listen, learn and collaborate with colleagues from all over the state.”

The committee’s 20 members met on a Friday and Saturday earlier this month at the WEA office in Federal Way. The committee is an almost even mix of education support professionals and certificated educators, and most of the committee members are educators of color. 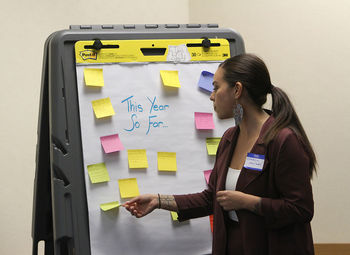 Early career educators from across the state are working to engage their peers in WEA and their local unions.

“We’re making a concerted effort to make the room a non-traditional mix of WEA members,” said Torian Hodges-Finch, a state-based UniServ director who is coordinating the committee’s work. “They are from all over the state. A mix of urban and rural. We were very intentional.”