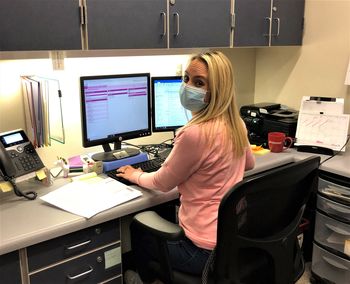 In July 2020 Issaquah classified nurses realized they needed representation. A combination of concerns due to the coronavirus and the fact that their school district has only four FTE certificated nursing positions led to a push to organize. The classified group felt a general sense of not being recognized or treated as healthcare professionals.

Historically, Issaquah Education Association (IEA) has represented certificated (ESA) nurses, not those who fall under the ESP umbrella, and the school district employs both ESP and certificated nurses. With the operational changes necessitated by the pandemic at the bargaining table, the inequity of having only the four ESA nurses having union protections and a voice in the workplace and the 19 ESP nurses having none, the classified nurses formed the Issaquah School Nurses Association (ISNA). The WEA-Samammish UniServ Council has welcomed them and voted for ISNA to join the Council, ISNA is now the fourth classified unions within the Council.

According to the group, there are many things happening that directly impact them and they need to formally be engaged in those conversations across their district. Additionally, they have discovered inequities depending on the school building in which they are each working, and the similarities in work required of nurses whether certified or classified. Because they have not had representation, many of the needs of the ESP nurses have not been vocalized or addressed. They have been frustrated with the lack of open communication, failure to involve them in decisions and planning in the pandemic, and over their compensation and working conditions.

Since organizing, ISNA members are being formally invited into conversations in which they were not previously asked to participate. They have already begun to advocate for a safe work environment for every member and student, and formally collaborate together to discuss concerns and advocate for change.

About joining the union as a new bargaining group, school nurses, Judy Lunde and Keri Webber said, “Our hope is for equity and recognition as professionals for the valuable work nurses do for the school community, and for the support to ensure it can be conducted in a safe and progressive workplace.”

Posted in: Bargaining rights | Local control | WE Are WEA | Blog Entries | ESP
Back to Blog