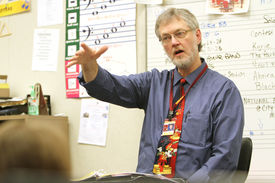 Karl Scarborough uses music as a tool to help shape and guide Winlock students to prepare for life.

Karl Scarborough doesn’t want to stifle the noise — or students’ creativity —when they are in his classroom.

Instead, he welcomes it, in tune or not.

“Music is all about that creative process,” says Scarborough, who is the sole band and choir teacher in the Winlock School District. “Music is kind of the grease that keeps the education system going, the thing that keeps kids creative.”

For 27 years, Scarborough has taught music in the 650-student district. Every week, he drives from the elementary school where he teaches fifth-grade band to the middle/high school where he leads the high school and middle school bands and choirs.

“It’s been intimidating,” he admits of the induction. “I’m honored, obviously, but it’s been a whirlwind.” 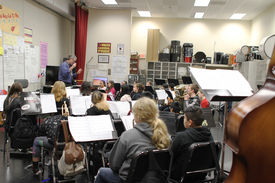 Scarborough describes his teaching environment as “organized chaos,” so it’s not surprising that he doesn’t always jump in when his students are noisy or distracted. Often, he says, those are the moments that spark the greatest creativity. He coordinates the “middle school massed band,” which brings approximately 450 band students from the smaller school districts in Lewis County together for a day of music, practice and performance. Even though Winlock is small, he tries to get students performing as much as possible — at assemblies, sporting events, district competitions.

“We still go to the big district contests,” he says. “It’s really important for the kids to perform on stage and see other kids perform. We’re small but I’m okay with that.”

For his part, Scarborough says he uses music as a tool to shape and help get students ready for life and the world. When students become confident, they blossom. In his classes, he focuses on teamwork and encourages students to reach their potential. And, when they are performing on stage or riding for hours on buses to get to the ensembles and music competitions, it’s about building relationships in a fun setting.

“It’s about grit and resilience,” Scarborough says. “You have to stick with it to see a difference.”

“Success is not always about winning all the time; success also is about improvement.” 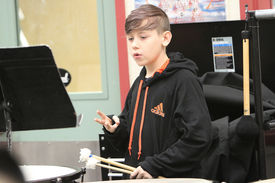 "Music is about grit and resilience," says Scarborough, who is the sole music teacher in Winlock where he has taught for 27 years.

Music is in Scarborough’s blood. His father was an art and drama teacher for 30 years and his mother was a professional singer. He flew jets and took photos in the Navy and attended Eastern Washington University all the while joining volunteer bands. Even though he is the only music teacher in the district, he still manages to find time to hone his craft and feed his own creative outlet. He co-conducts and plays the euphonium in the Northwest Wind Symphony. Three times a year, musicians receive music ahead of time to practice but gather for one, all-day rehearsal and give a performance that evening for the community at Centralia College.

March is Music in Our Schools Month and the National Association for Music Education (NAfME) provides ideas on how to celebrate and support school music education programs.

Posted in: Member spotlight | Blog Entries | Awards
Back to Blog