The Name Jar by Yangsook Choi

Having just moved from Korea, Unhei is anxious about fitting in. On her way to her first day of school, Unhei gets teased about her name, so she decides to not tell her class her name and tells them that she will pick a name later from a glass jar. But while Unhei thinks of being a Suzy, Laura or Amanda, nothing feels right. With the help of a new friend, Unhei will learn that the best name is her own. Grades K-3

Before he became an artist named Tyrus Wong, he was a boy named Wong Geng Yeo. He traveled from China to America with only a suitcase and immigration papers. Once in America, Tyrus seized every opportunity to make art, eventually enrolling at an art institute in Los Angeles. Eventually, he created the iconic backgrounds of Bambi. Grades K-3

A little boy named Kainoa introduces all the members of his family. He talks about his family's culture and Hawaiian family traditions. Grades K-2 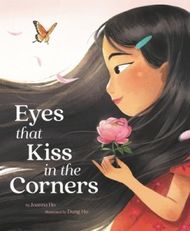 Eyes that Kiss in the Corners by Joanna Ho

A young Taiwanese girl notices that her eyes look different from her friends' eyes. They have big, round eyes and long lashes. She begins to wish for eyes like theirs until she realizes that her eyes are like her mother’s, Amah’s and Mei Mei’s. They have eyes that kiss in the corners. Grades K-3 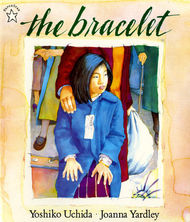 The Bracelet by Yoshiko Uchida

This picture book is about 7-year-old Emi and her family's experiences being forced to go into a concentration camp with other Japanese Americans during World War II. Grades K-3

Juna and her best friend, Hector, love to go on adventures in the park, collecting things to put in Juna’s empty kimchi jars. But then one day Hector unexpectedly moves away, and Juna is left wondering who will play with her. What Juna finds is that and new friends can be found in the most unexpected places. (Anti-Defamation League Discussion Guide) Grades K-3

A Map Into the World by Kao Kalia Yang

As the seasons change, so does a young Hmong girl's world. She moves into a new home with her family and encounters both birth and death. As this curious girl explores life inside her house and beyond, she collects bits of the natural world. But who are her treasures for? (Anti-Defamation League Discussion Guide) Grades K-3 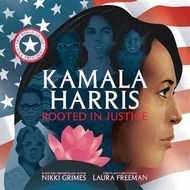 Discover the incredible story of a young daughter of immigrants who would grow up to defend the rights of people everywhere in this picture-book biography of Vice President Kamala Harris. (Anti-Defamation League Discussion Guide) Grades K-4

We Are Inspiring: The Stories of 32 Inspirational Asian American Women by Angel Trazo

We Are Inspiring shares the stories of 32 Asian-American women and what they did in our world. Grades 1-3

Fish For Jimmy: Inspired by One Family’s Experience in a Japanese American Internment Camp by Katie Yamasaki

For two boys in a Japanese American family, everything changed when Japan bombed Pearl Harbor and the United States went to war. With the family forced to leave their home and go to an internment camp, Jimmy loses his appetite. Older brother Taro takes matters into his own hands and, night after night, sneaks out of the camp and catches fresh fish for Jimmy to help make him strong again. (Anti-Defamation League Discussion Guide) Grades 1-5

I Am an American by Martha Brockenbrough and Grace Lin; illustrated by Julia Kuo

When American-born Wong Kim Ark returns home to San Francisco after a visit to China, he’s stopped and told he cannot enter: He isn’t American. His challenged that all the way to the Supreme Court and won, confirming birthright citizenship for all Americans. Grades 3-6

The Year of the Rat by Grace Lin

As her family celebrates the Lunar New Year, young Pacy must deal with her best friend moving away, prejudice and struggles with acceptance. (Anti-Defamation League Discussion Guide) Grades 3-6

Meena and River have a lot in common:  fathers forced to work away from home to make ends meet, grandmothers who mean the world to them, and faithful dogs.  But Meena is an Indian immigrant girl living in New York City's Chinatown, while River is a Kentucky coal miner's son.  This unlikely pair become pen pals, sharing thoughts and, as their camaraderie deepens, discovering common ground. (Anti-Defamation League Discussion Guide) Grades 3-6

Ten-year-old Mia Tang has a lot of secrets: She lives in a motel, not a big house. Her parents hide immigrants in the motel's empty rooms. And she wants to be a writer. It will take courage, kindness and hard work to get through this year. (Anti-Defamation League Discussion Guide) Grades 3-6