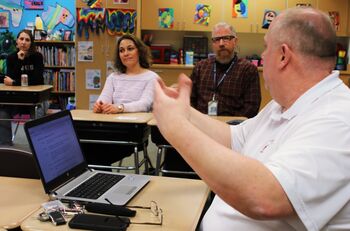 When people think of the power of their union, their first thoughts are often of the financial gains of being in a union. After all, it's true that union workers enjoy better wages and benefits than similarly qualified non-union workers.

For Arlington Education Association Equity Team members, being involved in their union is also a way they can make their schools better and give back — to their students, fellow educators and the community.

The equity team formed in 2020, and the timing was less than ideal according to its chair, Presidents Elementary fifth-grade teacher Denise Wilson. "The pandemic really put a crunch on us," she says. "We had just started our team and then the pandemic hit."

Still, the 20-plus member team has advocated for positive change on several issues in that time and its first monthly newsletter went out in January. 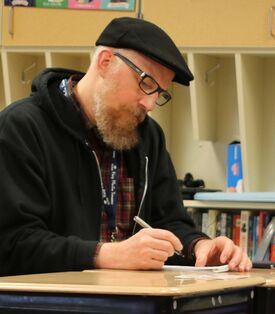 Arlington High teacher Jason Ford wanted a way to do more to promote equity in schools, so he asked others in his local association what they could do.

"He is a huge advocate for all people," Wilson says of Ford. "He had been doing work with marginalized people and noticed that we had people in our district that we weren't serving."

She says, "Jason Ford went to (Arlington EA President) Jason Klein and said, 'Can we leverage our union to do something about this?' and Jason Klein said, 'You know what? You want it, let's do it.’ " "It was something that I felt we needed," Klein says.

Klein is in his 25th year of teaching at Arlington High and is himself an Arlington High School graduate. He has deep local roots as well: His grandfather is a 1943 Arlington High grad. Though the town historically has not had a very diverse population, there’s been a significant demographic shift in recent years.

"It's changing rapidly," Ford says. "People are migrating and moving. I think there's 38 or 40 languages spoken in the district.”

According to the Arlington School District website, student ethnic makeup went from 80.5% white in 2011-12 to 74.5% white in 2018-19. Educators on the equity team want to ensure that these changes are opportunities for broader learning rather than points of conflict.

As recently as 2004, a local racist incident shook the community and even made the national news when a Black minister's family woke at 2 a.m. to find a cross burning in their front yard.

"That really hit home," Klein says. "Their kids were in the school that I teach in. I think it's gotten a little bit better as we've gotten more inclusive and diverse, but it's still there."

While the team looks forward to collaborating with district leadership on its initiatives, members don’t plan to passively sit back and wait for things to happen.

"We want to use the newsletter as a vehicle to push things forward," Wilson says.

Unlike a district-selected equity committee, this team is made up of union volunteers. They see advocating for equity as part of their overall role of advocating for students and fellow school staffers.

In addition to the newsletter, the team has pushed for equity clock hours and a districtwide equity plan, supported a request for a middle-school LGBTQ+ club, advocated for equity positions in every building and led book studies.

Another achievement that grew from team members' commitment to both their union and equity is new language in the collective bargaining agreement (CBA) between Arlington EA members and the district. Spelling out all parties' intent to work toward equity in a legally binding document helps ensure that good intentions don’t simply get lost in the shuffle.

Moving forward, they'd also like to see the district do more to celebrate different heritage months, holidays and observances.

"We want to make sure these acknowledgments aren't just going out to staff," Wilson says. "They should be on all our community-facing websites, all our communications in all our buildings."

Another need they see is for the district be more proactive in equity-based staff recruitment.

"When I bring up the hiring, they get a little defensive on that," Klein says.

"You can't just say, 'Well, we posted it.' You've got to go out to these universities and make sure that these students know that we're looking to diversify our staff and we want to hire more people of color."

Wilson agrees: "I'm one of 2 teachers of color at my elementary school." 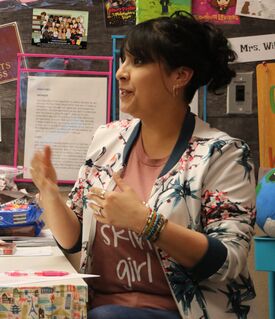 Since starting this work, team members have found that their colleagues come to them more often for advice on how to handle equity-related matters. They're encouraged by this willingness to learn and grow.

"Come and ask questions." Wilson says. "We're not here to judge you."

The team's rapid growth over the past couple of years has also been encouraging.

Klein agrees, "This is one more way that our union is able to support doing what's right. It's something that's meaningful."

That has included educators who weren't interested in previous Arlington EA activities, Wilson says: "Two of our new members said, 'I've never really done anything union-related, but these issues need to be addressed and you guys are doing good work.' "

Inspired? Get involved in your area equity team

Locals and councils throughout the state have equity teams. Here are some things they work on:

Posted in: Blog Entries | Racial Equity
Back to Blog