The state Supreme Court ruled in June, 2018 that the state is finally in compliance with the court's 2012 McCleary decision. Because of McCleary, state funding for K-12 basic education has increased by billions of dollars, including billions for competitive and professional educator compensation. In 2016-2018, WEA members in school districts across the state negotiated historic pay increases for both certificated and classified education support professionals. 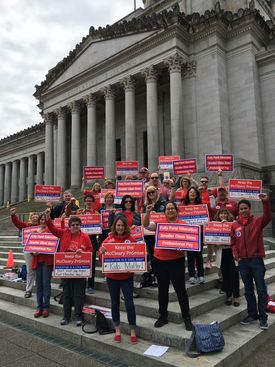 Protecting school funding in a time of deficits

The McCleary decision protects funding for basic education, which can only be cut for academic reasons-- not for budget reasons.  Our schools, however, are so much more than basic education.  More than ever our students need additional supports for mental health, social work, nutrition, and housing.  We support a more equitable tax structure to ensure we continue to support our students.

WEA and many of our locals have been major supporters and funders of the McCleary court case since the beginning more than a decade ago.

In its January, 2012 McCleary decision, the state Supreme Court ordered the state to fully fund K-12 public schools as required by Article IX of the Washington Constitution:

"It is the paramount duty of the state to make ample provision for the education of all children residing within its borders, without distinction or preference on account of race, color, caste, or sex."

In McCleary, the Supreme Court ruled that the Legislature had failed to fulfill its constitutional obligation to our state's 1.1 million students. The court also retained jurisdiction in the case and ordered the state to report back on its progress in complying with the court's order.

Two years later, the court found the Legislature in contempt for its failure to establish a plan for fully funding K-12 public education by Sept. 1, 2018. The Legislature failed to provide a plan, and the Supreme Court responded by fining the state $100,000 a day.

Along with dozens of local associations, school districts and other plaintiffs, WEA has been been at the forefront of the funding fight since WEA members approved a special dues assessent in 2004. The McCleary case was filed in 2007, and a superior court judge ruled in support in 2010, followed by the Supreme Court's decision in 2012.

Here are links to all McCleary court decisions and reports.