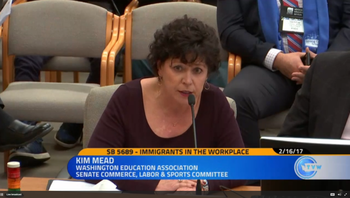 Two things you can do right now to support public education funding:

We're disappointed. We note that the Court did not reach one of our principal arguments that it is inevitable that the State will have to resort to using general funds that are restricted to the common schools to pay for Charter Schools because in the 2016-2017 fiscal year there were sufficient lottery revenues to cover costs.  The court left open a future challenge when lottery revenues are insufficient. Providing all of Washington's 1.1 million students with an amply funded, high-quality public education is our state's paramount duty, and diverting public funds to unaccountable, privately run charter schools is not the solution. This ruling doesn't change that fact. No decision whether to appeal. In the meantime, we're going to focus on making sure the Legislature finally step up and fully fund K-12 public schools as the Constitution requires.

We have some news and some rumors to report.

Senator Mullet introduced yet another education funding proposal.  Based on our reading of the bill – and the general reaction from folks on the hill –  it might get a hearing, but it is unlikely to move.  Instead, budget negotiators could add any useful ideas from the plan into whatever final package they build later in the session.

We are awaiting a detailed fiscal analysis, but at first glance, Mullet’s plan doesn’t appear to provide enough public education funding for our students.

We also hear that the Senate Republicans might release a second education funding plan. This comes after several weeks of errors and mis-steps, where no one seems to agree on what the first bill actually would do.

On Monday, the House Education Committee heard HB 1511 a bill that would require more state funds be dedicated for students in foster care or who are homeless, and for high poverty schools with underperforming students. WEA testified in support of the bill.

Also on Monday, House Appropriations heard HB 1237, which would allow use of local funds for bargaining salaries at Community and Technical Colleges. WEA supports this bill.

On Tuesday, HB 1168 passed out of the House Higher Education Committee and was referred to the Appropriations Committee. This is the bill to increase the number of full time faculty. It was amended to remove the 70% FTE goal and now asks for state funding for 200 conversions in each of the next three years. It directs the State Board for Community and Technical Colleges to create a plan to increase the number of full-time equivalents. WEA continues to support this bill.

SB 5726 would require education employees to move to the state’s health care plan. SB 5727 mandates health benefit premiums for families cannot be more than three times the cost of an individual’s health benefits premium costs. This bill attempts to require school districts to provide a cost structure similar to the state’s PEBB model, but, and this is important, the bill does NOT provide the same level of funding for educators as it does for state employee health care. Currently, the state provides $888 month for each of its employees, but only $780 per month per state-funded education FTE. WEA opposes both of these bills.

SB 5070 is the bill that requires paraeducators to be licensed, but provides no funding to implement. It was heard in Senate Ways and means with no action taken at this time.  WEA opposes this bill.

HB 1115, which would provide a funded professional development system for paraeducators is scheduled for a hearing in House Appropriations on Monday next week. WEA supports HB 1115.

On Thursday, Senate Ways and Means had a public meeting on  SB 5702, to modernize the funding formulas for the state’s share of school construction costs.  The current formula has been around since the early 1960’s, and assumptions used to determine the size of classrooms and schools go back to the late 1970’s.  This bill would update formulas and specifications to help reduce the gap between what is currently funded and the actual costs of construction.  WEA testified in support of this bill.

The “Right to Work” bill didn’t make it out of the Senate Commerce, Labor and Sports committee this week, but the other Freedom Foundation/American Legislative Exchange Council (ALEC) bills did. We don’t think they will get any traction in the House.

Friday was the policy committee cut-off date in both chambers.  That means bills must be passed out of their policy committee to remain alive.  Next step is they go to a fiscal committee or to the Rules Committee of their particular Chamber. The exception is any bill the legislature deems “Necessary to Implement the Budget.” Those bills can be passed at any time during the legislative session.

HB 1115, which would provide a funded professional development system for paraeducators is scheduled for a hearing in House Appropriations on Monday next week.  WEA supports HB 1115.

As of this writing, many bills haven’t been added to the schedule. It is the fiscal cut-off week, and many bills will be added to House Appropriations or Senate Ways and Means as the week goes by.  If a bill does not make it out of those two committees this week, it will die for the year, unless it is deemed “Necessary to Implement the Budget,” which many education-related bills are.